The kukui (Aleurites moluccana) is a tree that has stood by the side of Polynesian peoples for thousands of years and is one of the foundations of their cultures. Of the nearly thirty species of “canoe” plants that they carried with them during their epic migrations from the Western Pacific out into the vastness of the Central Pacific, no cultural plant has had a greater diversity of uses than has kukui. It is no coincidence that the kukui is our State tree.

Kukui is a very distinctive tree that is easily recognized in Hawaiian forests. Its large, pale-green leaves are of a color like no other tree and they can be recognized from great distances. Kukui are most common in lowland, windward valley bottoms where they tend to form dense groves. Large trees can grow to 80 ft. tall with 4 ft. diameter trunks, although they are often smaller in drier or more exposed sites.

The name kukui is derived from an older name kuikui and thus appears to be a contraction of that word. Tuitui is the name for this tree in such South Pacific islands as Tonga and Rarotonga. This shows that the name has a common and likely ancient Polynesian origin. A second meaning for kukui in the Hawaiian dictionary is lamp, light or torch, which is descriptive of its primary and most outstanding use in Hawaiian life. It is interesting to note that the Samoan name for this tree is lama, another word meaning light (with connotations also of enlightenment).

Some of the many uses of kukui include:

Kukui are beautiful trees. When they are young and vigorous they have large and distinctly 3 or 5-lobed leaves and an attractive spreading crown. As they mature the branches become more angular and the leaves become less lobed and develop an almost whitish-green color.

Occasionally one will come across an ancient tree that dominates the surrounding forest. These venerable trees often have a gnarly aspect with impossibly angled branches which zigzag through the canopy. The ground beneath old trees is usually carpeted with an accumulation of many years worth of unopened nuts waiting for the right conditions to germinate.

Rarely kukui can grow to immense sizes. I recall a grove I saw in the 1960s in Hanakoa Valley above the Kalalau Trail on Kaua‘i. Six trees growing on rich alluvial soil in a small side gulch were estimated to be 120 ft. tall. These trees were as straight as arrows and had no branches below a height of 60 ft. I estimated their dimensions but was so impressed that I vowed to return to get accurate measurements of their heights and diameters. Surely they would be the tallest kukui on record. About a year later I was able to come back to the area, but was shocked to find that the entire grove was gone, and where the alluvial soil had been there was a gaping gulch 30 ft. deep. After my initial disbelief that so profound a change could have occurred, I recalled that about four months prior to this a massive rain event had dropped 34 in. of rain in one day along the Napali Coast which was recorded at the Kalalau Lookout rain gauge. The catastrophic flooding over these canyon cliffs would have been awesome to behold. The great kukui were reduced to shattered remnants in the gulch below, but the vision of these majestic trees lives on in my memory.

In a more contemplative vein, kukui forests can provide special moments that are unforgettable. Early one morning many years ago I was walking up Pi‘ina‘au Valley above Ke‘anae through a kukui forest with an understory of ‘awapuhi and ki.

The forest was cool and still with dappled light illuminating the forest floor. The scene was so peaceful and beautiful that I stopped to admire and enjoy it. After a few moments this meditative state was punctuated when a kukui leaf high in the canopy detached from its twig and began to glide, like a perfectly designed paper plane, slowly and silently in a broad arc. The leaf circled me where I stood until, after about 20 seconds, it came lightly to rest on the forest floor nearby. It was as though this display was a ho‘ailona, a sign or a token of recognition, and a makana aloha, a gift of love, acknowledging and reciprocating my appreciation of the moment and the place. It is no wonder that Hawai‘i has a special relationship with kukui. Kukui is indeed a tree we can all appreciate and cherish.

Location
The Garden is located at 150 Kanaloa Avenue in Kahului Maui, right across from the War Memorial Stadium.
(808) 249-2798

Please Consider a Donation
Every dollar contributed to Maui Nui Botanical Gardens goes directly towards the preservation of Native Hawaiian Plants and the upkeep of our collection that includes some of the rarest specimens in whole world! 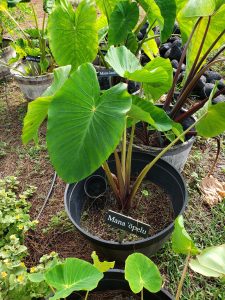 Learn about the Mana family of kalo (taro) with MNBG Kalo Varieties Manager, Namea Hoshino. Participants will learn about the cultural uses of the Mana group of taro and identification[...]
View Calendar